In the past few years, COVID-19 has had a significant effect upon dental practices in Colorado. 69 percent reported being open back in 2020 but supporting a lowered volume of patients. This likely led to pent-up dental demand, longer waits to schedule significant dental care, and the loss of very small dental practices who are unable to weather the economic pressures brought by reduced patient volume. For Coloradans seeking dental coverage, it is extremely important to confirm which dentists accept the coverage prior to purchase.

A review of nearly thirty 2022 dental plans offered in Colorado found that most (93 percent) were preferred provider organizations (PPO dental plans). These plans use a network of dentists to deliver care at their lowest level of out-of-pocket costs but do allow for out-of-network care, albeit at higher out-of-pocket costs for the enrollee. The other alternatives within the plan sample examined were indemnity plans and discount dental programs. Indemnity dental plans do not restrict enrollees to a particular collection of dentists but discount plans, on the other hand, do.

Using a hypothetical profile of a 30 year-old living in Denver, the average monthly premium for all the plans reviewed in the study was $42.11. Over the course of a year, that average premium expense adds up to $505.32. The range of premiums underlying the average was significant. The least expensive option, Careington Series 500 Dental Savings (a dental discount program), was only $8.95 a month, which was less than one fourth of the average premium across all plans in the review. The most expensive option, the Nationwide Classic 2000 + VSP Premium, was $89.60 a month, slightly more than twice the average across all plans. However, this plan included vision benefits along with dental benefits, thus providing a wider scope of coverage. As the section below will demonstrate, below those price points are considerable differences in plan benefits and out-of-pocket costs.

Another issue about dental benefits is that even when dental service is covered by the plan, there can be an annual limit on how much the insurer will pay towards covered dental care. This financial cap on benefit spending is known in the industry as the "maximum benefit" for the dental plan. Among the 2022 dental plans reviewed for Colorado, the highest maximum benefit in the first year of enrollment was $5,000 (NCD Nationwide 5000 Plan PPO). There were some plans that increased their annual benefit as the years of enrollment by an individual increased. The average limit on insurer benefit spending during the first year of enrollment was $1,614 for the plans within the study.

With the exception of one plan, the 29 plans reviewed charged an enrollee coinsurance with respect to a filling. Coinsurance is a fee paid by the enrollee after the insurer has paid a percentage of the total dental service cost. For a traditional filling, the average coinsurance paid by the insurance company was 61 percent of the cost, leaving the remaining 39 percent to be paid out-of-pocket by the enrollee. Eleven plans paid 80 percent of the filling cost, leaving an enrollee only 20 percent to pay.

Below is a list of the dental plans that are currently the top sellers for DentalInsurance.com within the state of Colorado.

Our best-selling plans in Colorado

No Waiting Periods for Preventive and Basic services

Representing almost seven-in-ten licensed dentists within Colorado, the Colorado Dental Association is the definitive resource for the state’s dental issues. This website serves dentistry professionals as well as the general public in their questions about oral health.

This page at the CDA site provides information about low cost dentistry, education, and filing a complaint, as well as links to the Colorado Mission of Mercy, an annual 2-day dental clinic located in a different Colorado city each year. 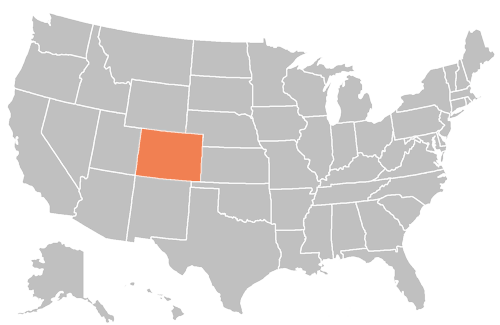 Nil sine numine (Nothing without the power)